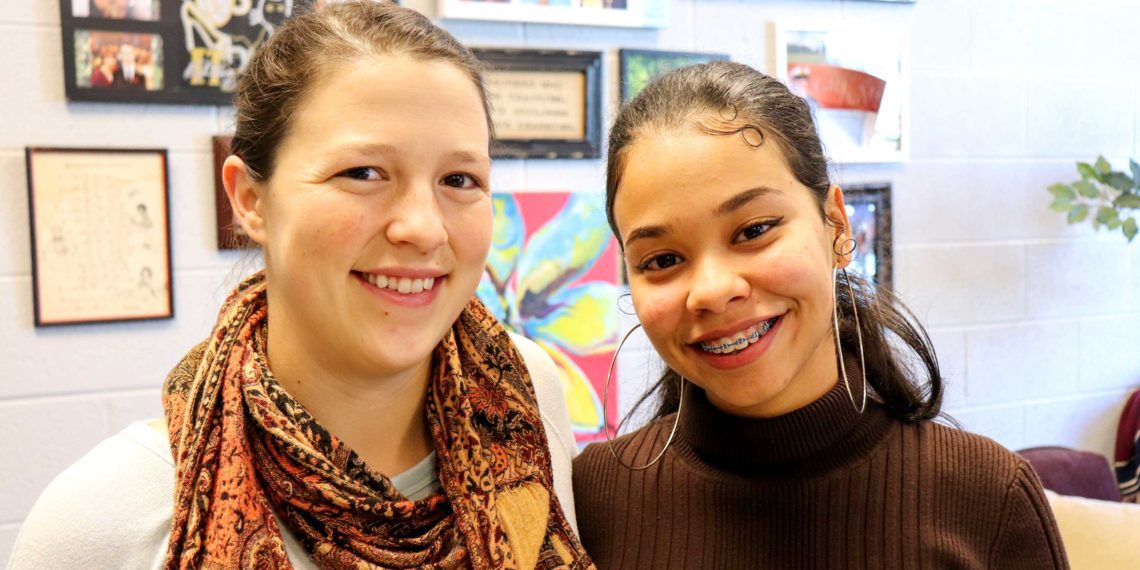 I first learned about the Scholars Latino Initiative (SLI) in the fall of 2018 when I interviewed one of its scholars, Mary, for a WMRA report about inequalities in education.

ProPublica and the New York Times had detailed disparities across the country showing national statistics all the way down to individual school systems and schools. At Harrisonburg High School, according to its website, white students were “three times as likely to be enrolled in at least one AP class as Hispanic students.”

How would a student respond to that statistic? I wondered, and was introduced to Mary, who at age 12 had moved to Harrisonburg from Santiago, Dominican Republic. A high school senior at HHS, Mary was enrolled in high school honors and Advanced Placement (AP) courses, as well as college dual enrollment courses.

She wasn’t surprised by the report.

“It’s kind of hard to integrate the people who were not [at] the table when the system was being made,” she told me. “It doesn’t have to be just AP and dual enrollment [classes]. Even in some honors classes, you can kind of step in those classes and you can see that there’s a higher percentage of students who are not of color.”

THE IMPACT OF DISPARITIES – AND SLI’S RESPONSE

A year and a half later, the COVID-19 pandemic further exposed the impact of racial and educational disparities: “Hispanics are nearly twice as likely as whites to have lost their jobs amid the coronavirus shutdowns,” a Washington Post-Ipsos poll found, and “younger and blue-collar workers, as well as those without college degrees, are most likely to have lost their jobs.”

Fostering college access for underrepresented populations takes strategic diligence. Even with hard work and determination, Latino/x students like Mary who dream of being the first in their families to earn a college degree, along with their parents, may lack essential information about how to prepare for and apply to college, access financial aid or additional funding, and navigate college life.

“SLI opens doors of opportunity through experiences and funding to support student development of skills and mindsets to prepare them for college,” said Patrick Lintner, chief academic officer for Harrisonburg City Public Schools and SLI supporter. “These talented students are so important for our future!”

Not long ago I caught up with Mary, after she’d completed her first year of studies at James Madison University, where she is a health sciences major and medical Spanish minor. She is also the Woodson Martin Democracy Fellow at JMU Civic, and one of a handful of students on JMU’s campus named as a JMU First Generation Scholar.

She said she joined SLI in high school mainly because it was something to do with friends, but it soon became more than that: SLI was not only a support system, but a place for asking questions and figuring out how to navigate financial aid paperwork, think critically, approach professors and succeed in a college class.

Mary also joined HHS’s interpreters club, and now sees medical interpreting as an enjoyable career option and a way to explore other healthcare professions. She was fascinated this spring by a JMU class about medicine and culture in Latin America, which focused on the connections between health systems, politics, and socioeconomics in various countries.

This past year corroborated what Mary had learned in SLI: Success in college requires constant work, even more than in high school.

“I went in already knowing that, but my first year definitely confirmed it,” she said.

College also offered continued SLI opportunities for Mary. In her fellowship she assisted with census and voter registration awareness efforts on campus, and was the public face for two SLI-led community events held at Harrisonburg’s Lucy Simms Center that offered “a safe space” for people in the community to share their immigrant stories.

This spring the pandemic brought its own twist to the academic year: online classes. Mary was already living at home with her mom, stepdad, and younger sister, so she didn’t have to pack up a residence hall room, but taking classes exclusively online demanded extra effort and motivation.

“I definitely felt like I was living senior year of high school all over again,” she said. “It felt like I had a severe case of senioritis, like I just could not get myself to focus on a single thing.”

But focus she did, and after a successful finish is looking forward to the start of the fall semester.

This summer Mary is working as a cashier at a Harrisonburg big box store where her mom also works. It’s a job she started last August and held through the school year, selling tools and home improvement supplies – “taking people’s money and letting them go out the door,” she said.

Those might be different kinds of tools from the ones she picked up in SLI, where she received college prep training that she said helped equip her with a “little reference kit or toolbox” for college success.

But opening doors? SLI scholars like Mary know that it’s no small matter.